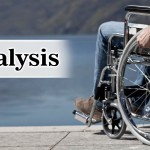 There’s renewed hope for patients who have suffered a paralysis of their lower limbs due to a spinal-cord accident or deterioration. A heartwarming story in Nature International Journal of Science highlighted a former college baseball player who was struck by an automobile. Doctors said he would never walk again. The player and his father reached out to numerous specialists across the globe in the hope of finding – hope again. Eventually, he was seen by a doctor at the University of Louisville who tried various therapies which made, at best, minor improvements in his health.

In 2009, the doctors’ team implanted an electric stimulator with 16 electrodes between his vertebrae and his spinal cord.

After the simulator was implanted into the baseball player, remarkably, he was able to wiggle his toes. Further research has shown the stimulators have helped out 12 patients walk with support  - some up to one kilometer (about 3/5 of a mile). The stimulators also seem to help paralyzed patients with bladder function, bowel function, sexual function, and with high blood pressure.

New studies are continuing. Thousands of paralyzed patients are on waiting lists. Physicians are beginning to think for some patients, who have residual connections between the spine and the brain, that the stimulators might be a breakthrough.

This blog does not constitute medical advice.

We see patients from Langhorne, Newtown, Doylestown, Bucks County, Montgomery County, Trenton, and Philadelphia. You can make an appointment by calling 215.741.7031.

This entry was posted in Back pain, Chronic Pain, Spinal cord stimulator and tagged electrodes, paralysis, stimulator. Bookmark the permalink.